It’s no secret that I am not a Chef.  I’m lucky if I actually prepare five meals a year.  Don’t get me wrong, I make spaghetti, mac-n-cheese and hot dogs like a pro, but to actually create a REAL meal, it just doesn’t happen.


While looking for some Paleo friendly meals, I came across this awesome crock pot recipe.  This working GurleeGirrl loves crock pot meals.  Would I like to have my meal ready when I walk in the door?  Yes please.  So I decided to give it a try. 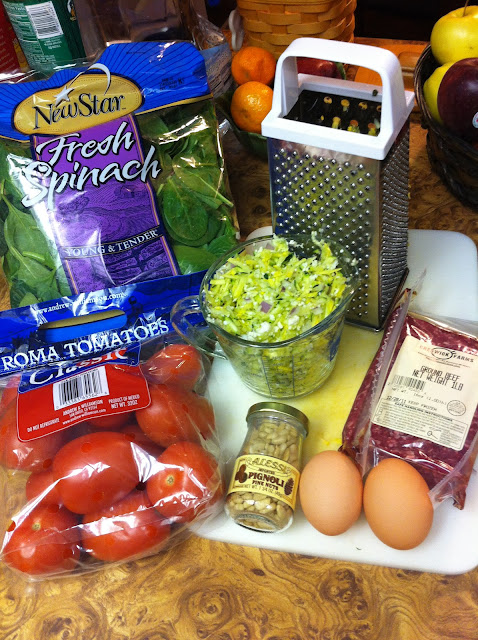 Let’s Get Started:
Shred or grate your assorted vegetables until you fill a small bowl with about 2 cups of a vegetable mixture. Hand toss well.
Add in your 2 beaten eggs to the vegetable mix and stir well. Make sure the veggies are completely coated by the egg. Press this mixture down into the bowl and let it sit for a minute or two. 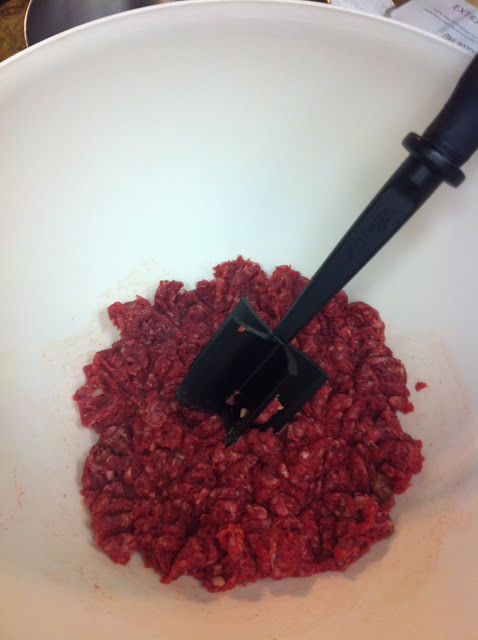 Add your egg and vegetable mixture to the ground meat. Use your hands to fully mix the ingredients. Roll the mixture over itself many times, as if you were kneading dough. Press the mixture down into the bowl to form one large meat patty. 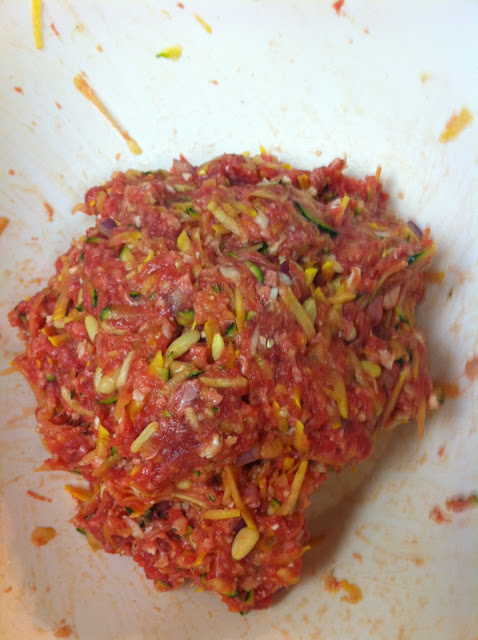 Time to roll your meatballs. I rolled them to a size slightly larger than a golf ball. Make sure you cup your hands to ensure they are packed tightly.  I got 15 out of my mixture. 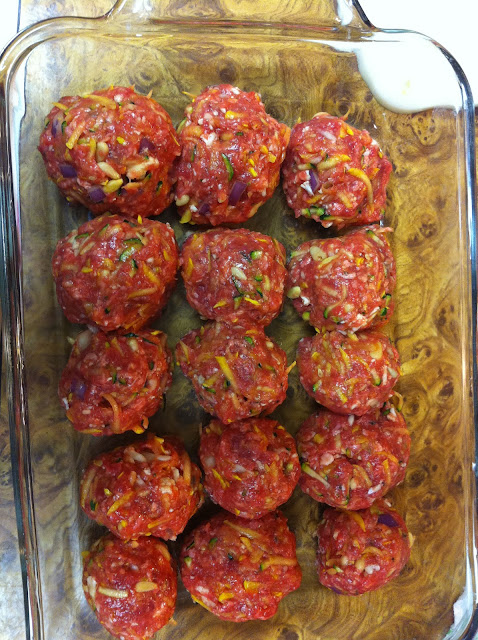 Unless you are using crushed canned tomatoes, take 4-5 fresh tomatoes and puree with food processor. 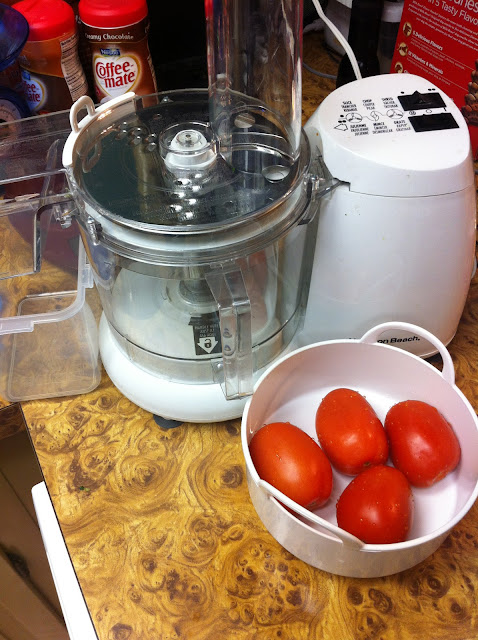 Use just enough of your crushed tomatoes to cover the bottom of your crock pot / slow cooker. You should only see red at the bottom now. 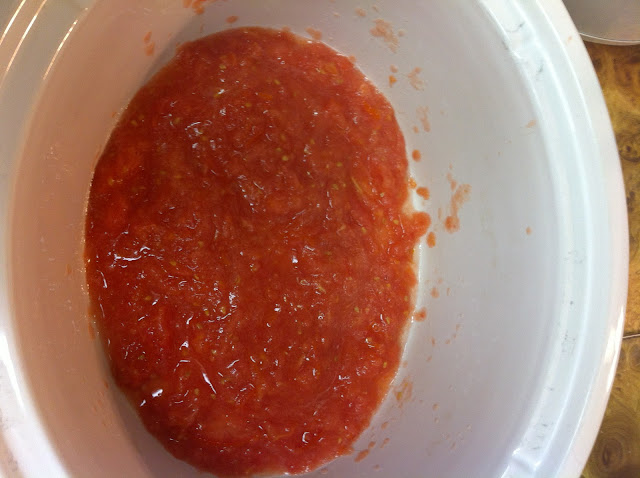 Cover the tomatoes with 2 hand fulls of spinach or until you only see green at the bottom. 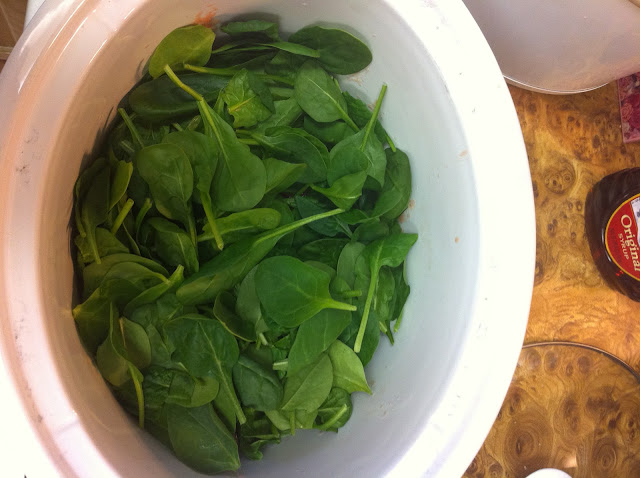 Line your meatballs around the crock pot, they should be slightly touching the sides. Form a ring around the pot and place the extra meatballs inside to form a second ring. 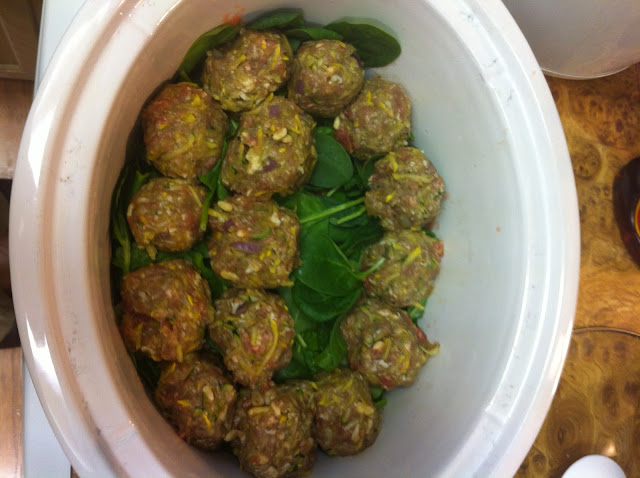 
Cover the meatballs with another 2 large hand fulls of spinach or until you can only see green. I used the rest of the bag.  Sprinkle any extra pine nuts on top of the spinach. 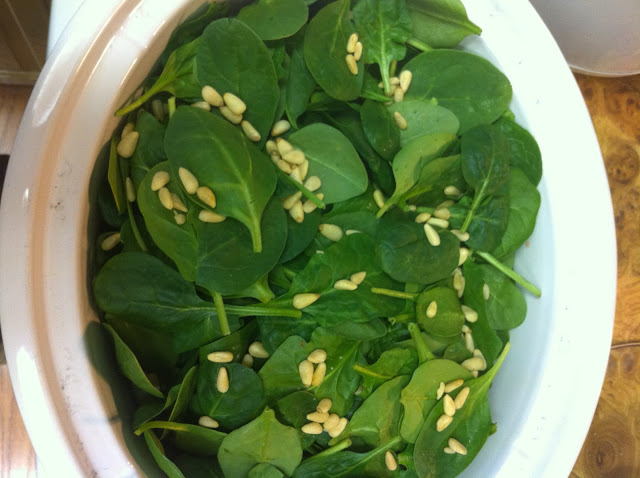 Place the cover on your crock pot and set the timer for 3 to 4 hours on high or 5 to 6 hours on low.  I chose to cook mine on high for 3-1/2 hours.  I actually prepared my “crock” the night before and placed it in the refrigerator and my mom plugged it in at 2:30pm for me.


When I walked in at 5:15pm, the house smelled so good!  I decided to steam some fresh asparagus and broccoli to accompany my meatballs. Dinner was on the table by 6:00pm.
I plated 3 meatballs per adult and 2 for the daughter (my son is way too picky and wouldn’t even try them).
My masterpiece! 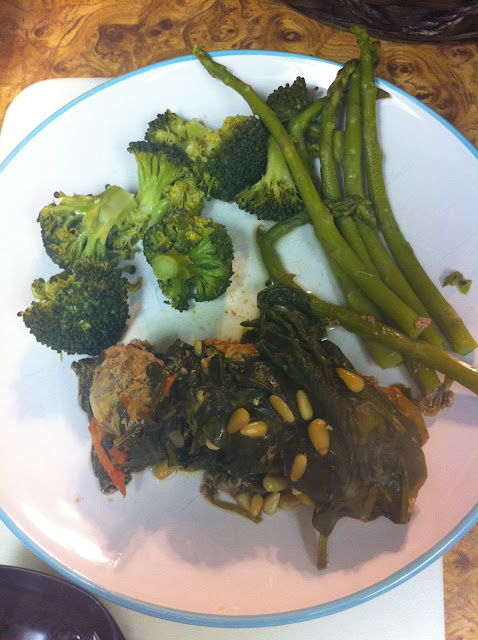 My daughter’s first response was that they were really good – but she ended up dipping them in the gravy she had with her mashed potatoes.  That’s okay with me, because even with the gravy, I know this was a much healthier alternative to chicken nuggets, which is her normal request.


GTuck, Chrissy and I thought they were AMAZEBALLS!   he he
They were extremely juicy and the veggies gave them plenty of flavor!  I was a little worried since the recipe didn't even call for salt and pepper.

I am extremely proud of myself too.  I've always had a phobia about touching uncooked meat - thus the reason I do not cook.  I actually used my bare hands to mix the meat and veggie mixture together!! HUGE step for me.

Overall - easy and tasty!  I will definitely be making these again!
at 12:13 PM

I love those meatballs so much.

they look and sound good to me... but I love cooking :)

These look so good!!

I'm drooling a little bit. Haha. These look SO good!!!