Every so often I take a picture of me and Colton kissing each other. I mostly do it when we are on vacation, and I mostly do it because I want to cherish the moments where he is momma’s boy.

This past school year, he was instructed to bring in photos of his family, friends or pictures of things he likes. I went through some pictures on the computer and printed some off to show him what I found. One of the pictures I included in the lot is one where he and I are kissing each other, looking at the camera. He quietly went through the photos and put that on aside and said “all but this one are ok mom.” I said “why not this one?”, which he replied “I don’t know, just because.” Well my heart BROKE, but I knew this day was coming.

The next day I show up at school, with his pictures in the envelope. We begin to decorate his writer’s journal and he sees that I’ve put the picture back in. He pulls it out so fast and crumples it up. I was laughing so hard asking him over and over, “why not that one?” I then took the crumpled photo, smoothed it out and told him I was going to tape it to my shirt. OMG – he was getting so mad at me. I couldn’t stop teasing him or laughing. Finally, I put the photo away and we finished his project. He had Billy the Exterminator, TJ Hooker, a family pic, pictures of his cousins, pictures of him with his friends, a picture of Malibu, but not one of he and his momma kissing.

I know that my boy is growing up. I know that it’s no longer cool to be seen kissing mom, or holding mom’s hand in public. That is why I treasure every single moment with him when he wants to cuddle on the couch at night, when he wants to watch a movie just with mom or when he asks me to play Star Wars Trouble with him. I know these days are numbered too. My little baby boy is no longer a baby. He is quickly becoming my little man – and I couldn’t be prouder of him. 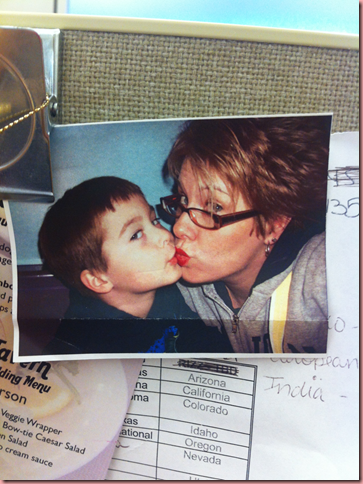 Said Photo which I PROUDLY display on my wall at work.

I still tease him about not using the picture.  He knows I still love it and so this past vacation, he even gave me a new one for the wall.  After I took it he said “Mom, don’t show that to anyone.  That’s just for you.”   I love that boy. 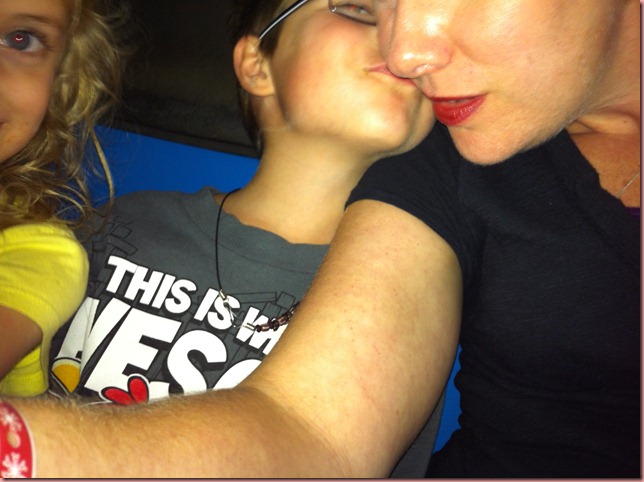 That is the sweetest! I love that he did that for you in the end :)

Shew, I remember Anika's first day of Middle School. I was driving her and as we approached the parking lot she said "No Kisses Okay". I thought I'd die. Then when she got out of the car I rolled my window down and said something to her (don't recall what) and she TOTALLY ignored me. I cried all the way home. Why do they have to grow up so quickly? Wouldn't you just love to be able to stop the hands of time and keep them little forever.

This is sooo precious!