This past Friday, I threw together a little field trip to The Henry Ford Museum with my sister, three of her kids, my mom, my kids and me.  I’ve been dying to see the Titanic Artifact Exhibition which has been there since March 31st.  Both kids have been asking about going and also wanted to see the Titanica movie showing at the IMAX theater too.

So we headed out at 10am (no sleeping in on my day off!!) and arrived at the Museum at 10:30ish.  Since my mom is a member, she was able to purchase both tickets at a discounted rate.  We purchased our IMAX tickets for 11:05am. 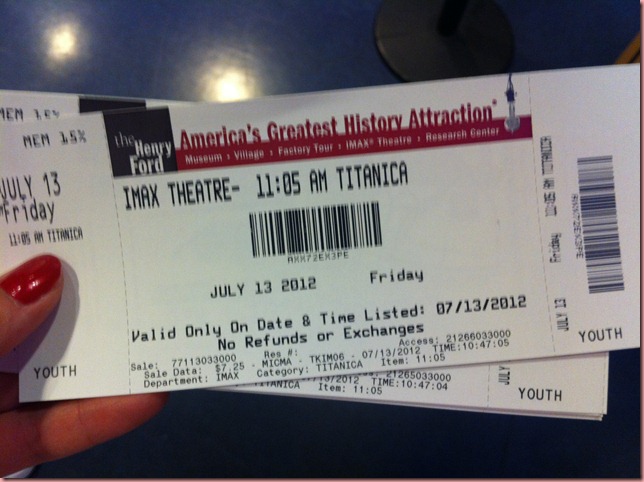 We bought some popcorn and pops and waited in line. 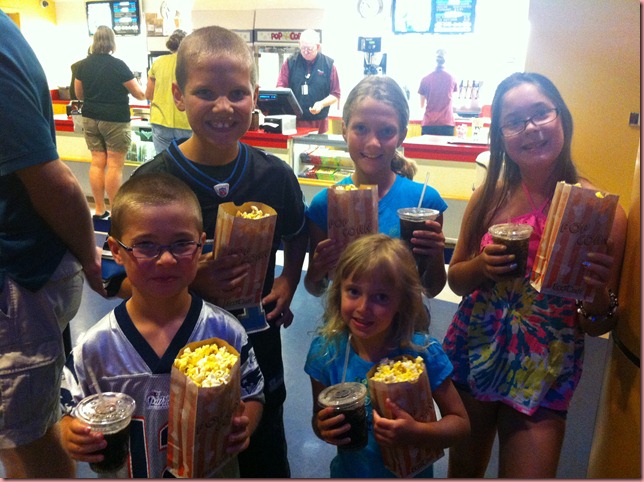 The movie is a documentary and lasts just under an hour.  It showed many still photos of the building of the boat, pictures of the completed boat and interviews with Eva Hart (a survivor) and the crew who made the dives.  It wasn’t too long and the kids seemed to enjoy it.  I found it very informative and when the discovery crew actually finds the ship, it was amazing! 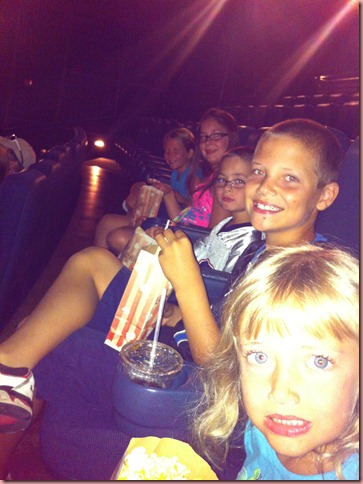 After the movie we had just enough time to make it to the next line for our 12:15pm Tour. 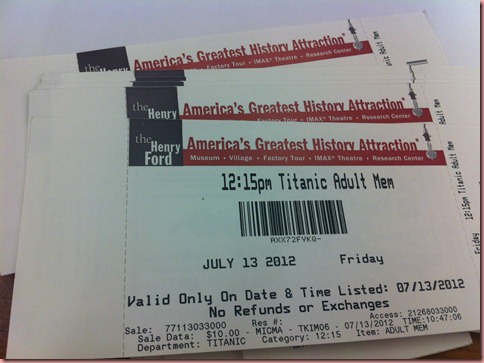 Upon entering the line, you are given a “Boarding Pass” with the name and information of a real passenger from the ship. 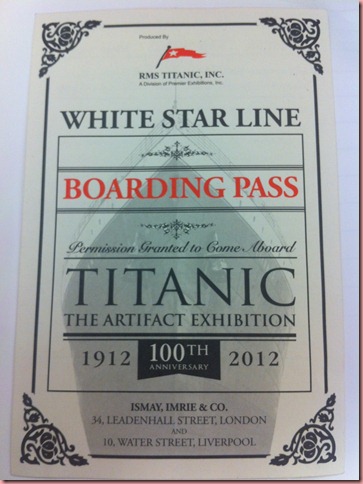 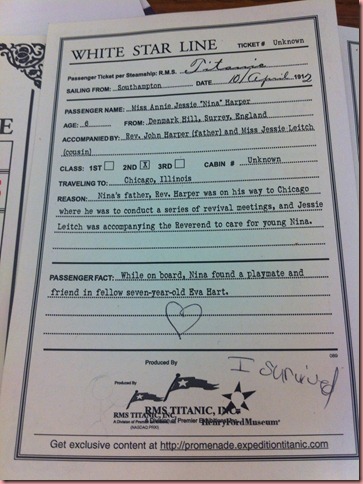 In the Exhibit itself you are not allowed to take photographs. They have an array of artifacts found at the wreckage and had information on passengers, crew, accommodations, differences between 1st, 2nd & 3rd class rooms/food/price/etc. They have example of a 1st class room and also of one of the crew quarters.  Similar to the “ice wall” at the Detroit Zoo, they had an iceberg to show just how cold the water was when the boat sank. It is a self guided tour, so you can take as long as you want to stroll through the rooms.

Upon entering there is a photo opportunity which we could not pass up ($8 for a 4x6 photo). 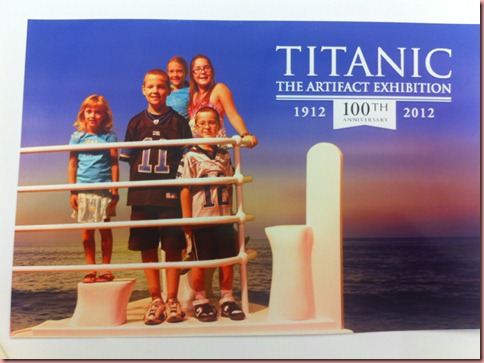 And another a little further in: 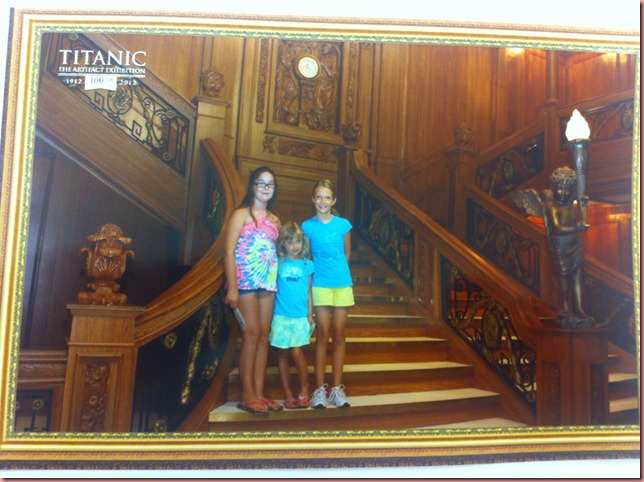 At the end of the exhibit, you can take your “Boarding Pass” to see if you are among the 700 of the 2200 passengers/crew which were survivors. 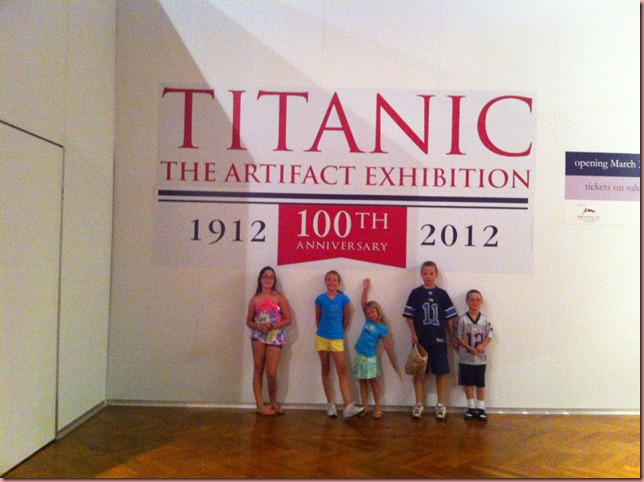 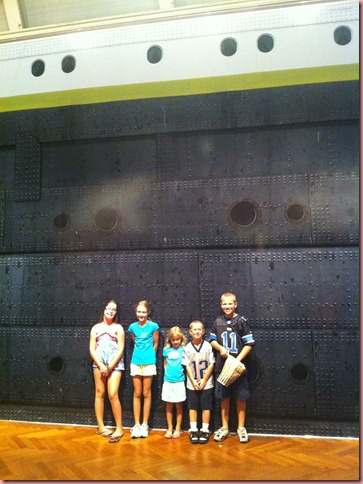 I would recommend a trip to see this exhibit if you are in the area.  We had kids ages 5 – 10 and they all enjoyed it.  My sister and her kids had seen a similar exhibit in Pigeon Forge, but she was impressed with this one, as all the artifacts are real, not replicas.

That sounds like a blast. We have a Titanic building in Branson that has artifacts, etc. I've never been, but when Branson was hit with the tornado back in February it got hit. Some of the employees joked that apparently they really didn't want it standing still.

I have been wanting to see this. I love the idea of finding out if you survive the shipwreck! We just attended the 4th of July Fireworks at Greenfield Village with the DSO. It is a great place :)

I had forgotten about that exhibit...maybe we should check it out!! I like the pictures of the kids on the Titantic!

That looks great! I wish they had something like that here. Fascinating.

Hey, you got an award on my blog today :)

awe you were over by me! i live only a hop and a skip away from there!

Hi Heather, I'm visiting from the Totally Social Link-Up. I used to live in your neck of the woods and we've been to that museum. You can spend a whole weekend there and still not see everything - great place to take kids!

I've subscribed by email to your site! I'm super-excited for the timing of this linky because all email subscribers to our site will automatically be entered into all of our Summer Reading Weekly Book Giveaways. Have a wonderful day, Renee :) http://motherdaughterbookreviews.com