Sometimes When I Say... 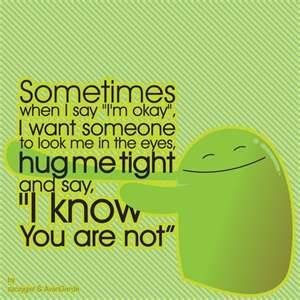 As tough as I seem on the outside, there are times when keepining a positive attitude and a stiff upper lip gets difficult.
I have to go for various tests every couple of months (i.e., PET Scans, C/T Scans, etc.), and although the tests alone are not painful, the amount of mental stress they cause, might be worse than pain.
This past Saturday I had a C/T scan scheduled.  Although I had many offers by people to take me, I declined, as I know it's not a difficult test and didn't want to have anyone waste their time taking me.
A little bit of nervousness set in on my drive to the scan, but I knew I was being silly.  Once there, the test only takes 10 minutes, and I was out the door.  However, leaving the hospital I ended up having an emotional breakdown.  I cried.  Not because of the test, but because of why I have to keep going for these tests, and the time spent waiting to get an "all is clear" from the doctor.
Although every doctor I've ever seen or talked to doesn't like to talk in terms of "odds", of course I've done my own investigating and according to the Livestrong site:
﻿Stage III

Now to some, those percentages may sound pretty darn good, but to this 38 year old woman, those numbers SUCK.  Now to clarify these numbers too, my doctor tried to explain that the average age of a breast cancer patient is 60 years old, and that many of the patients may have died from another ailment, it's not just because of the breast cancer.

I don't care what they say, I wake up everyday thinking about my dumb cancer.  I hate that as much as I want to pretend like it never happened, it did.

I've been cancer free since February of 2010, so just over two years.  In that time, I've had a "spot" on my lung that after two failed biopsies and a collapsed lung, they are just going to "watch".  Let's hope they are watching it VERY GOOD.  I've heard from others that I should be requesting a scan of my brain, since that is one of the most common places breast cancer spreads to. Yes, I guess I'd want to know if it spread, but at the same time, it's the scariest thing in the world actually knowing you have cancer. I couldn't see it, feel it or have any way of knowing it was there.  It just was.

I can't say it enough - EVERYTHING ABOUT CANCER SUCKS!

I promise not to dwell on it, but every now and then, I just have to say it out loud, then I bury it back inside.  I know that I'll be ok, whatever is thrown my way, because I am a fighter and I refuse to give up.  If my cancer comes back, it's going to get another ass-kicking.  You can bet on it.


This was an extremely hard and personal post for me.  I thought about not posting it after typing it up, but I feel admitting my fear, it may help me overcome it.
at 12:37 PM

Praying for strength for you! You have already gotten through so much it sounds like and you can get through more!

every day is a journey said...

Praying for you Dear!!! You've been through a lot but You are much stronger than you think.

I am glad you shared and know it was likely very hard! I can only imagine the emotions that you have gone through and I feel for you girlfriend! Keep your positive attitude and know that it's ok to be human, too!!

I'm really late in reading this and it pains my heart to read it. I now see exactly why you understand my hatred for cancer though mine is not quite as personal as yours obviously. *hugs* to you and I will keep praying everyday that it never comes back.