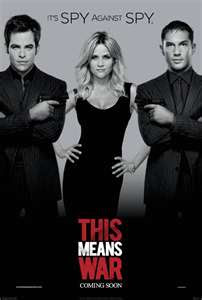 I want to start by letting you all know that I did not want to see this movie.  I had seen the preview for it numerous times, and although Chris Pine and Tom Hardy obviously are eye candy, the movie looked borderline ridiculous to me.


I like Reese Witherspoon, but let’s face it, most of the comedies she’s in fall flat (i.e., How Do You Know, Four Christmases).  Since we had already seen Safe House, which BTW is a good movie if you like shoot em up, ass kicking movies, and oh yeah, Ryan Reynolds is in it, so This Means War was really our only option this week. I was hoping for something much better than The Vow.  Remember how much I was disappointed in that?
This Means Wars goes something like this:


FDR (Pine) and Tuck (Hardy) are CIA agents and best friends.  They are pretty much each other’s ONLY friend.  They discover they are dating the same woman, Lauren (Witherspoon).  They agree to let Lauren decide who she wants to be with:

Tuck: "Let's just let her decide."
FDR: "Sure."
Tuck: "And while we're at it, why don't we put some ground rules in as well."
FDR: "I think we should."
Tuck: "Number one: I don't think we should tell her that we know each other."
FDR: "Number two: Let's stay out of each others way."
Tuck: "Number three: No hanky panky."
FDR: "God, you have not dated in a long time, have you?"
Tuck: "And if this ever starts to affect our friendship...
FDR: "Which it won't..."
Tuck: "Then we walk away."
FDR: "Done."
Tuck: "So then we have, we have..."
FDR: "We have a gentleman's agreement. May the best man win."
Lauren struggles with her decision to pick between the two guys.  She thinks both men have very different personalities and really enjoys dating both of them. She spends a lot of time talking to her bff Trish (Handler) trying to decide which boy she fancies more.
The entire time, FDR and Tuck, with the help of each of their own CIA teams, use all means necessary and at their disposal to sabotage the other's dates, gather  intel on Lauren, and plan perfect dates to take her on. This is where the real funny happens.
Obviously a lot of over-the-top spy-type stuff happens, but I’m telling you there are so many laugh out loud moments in this film.  Chelsea Handler basically plays herself, and has so many witty one liners, I was always cracking up. Just when you think she has nothing more to give to the movie than some lewd laughs, she throws out the most real line of the movie:

FDR and Tuck have awesome chemistry...with each other.  You fall in love with them both.  I was so torn - you end up rooting for them both to “win” the girl.
This is a funny, action-packed, romantic movie.  It has enough chick stuff to keep the ladies happy and just the right amount of CIA agent/boy stuff to keep the boys interested too!  And hey, doesn't everyone like funny?

It's really a MUST see!

So glad you enjoyed this movie. I've been 50-50 about wanting to watch it but after your review I think I just might go out and see it! Really sounds like a cute movie!