We began the night at Mongolian BBQ.  For those of you who are not familiar with Mongo, you basically get to create your own "feast" from a variety of meats and seafood, fresh veggies & flavor-packed sauces, freshly cooked before your eyes (Mongolian-style) on a large, flat grill!  It's totally on the top of my favorite restaurant list.

It's also become a slight obsession to create the largest bowl possible - without losing any of my "fixings" before I can get it to the grill.

Mongo would prefer to start your bowl with your meat choice, then add your veggies - this would be because you really can't pack a whole lot of veggies on top of a pile of meat - so you won't use as much meat.  Well for YEARS this is how I would create my masterpiece.  I was happy.

Then, one fine day, I happened to notice a bunch of guys waiting for their bowls to be placed on the grill.  And these were not just your normal size/type of bowls - these geniuses had the biggest bowls I had ever seen.  How you ask?  Because they figured out that you could pack a TON of fresh veggies in a bowl, then secure them in with a TON of meat that acts like a glue to keep everything in place!!!

Well since that day, I have been a "backwards bowler".  That's right.  I try to cram as much as I can, to the point where I feel I border ridiculousness.  However, I am not wasteful.  I plan for a "take-home" container to get an extra lunch or dinner out of it.  And for $12.99 for one bowl at dinner - I really don't think I am ripping them off.  How do you think I did?  Now keep in mind - this is AFTER the grilling process.  I am way too embarrassed to show you the crazy-tall uncooked bowl - I'll save that one for another time. 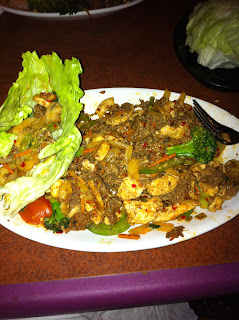 Being the "good dieter" that I am, I chose to use lettuce wraps versus their incredibly awesome tortillas.  Also - they offer brown or white rice - which I skipped too.  I might have overdone it with the garlic and cayenne pepper - because it was pretty firey - but it was delish!

Now on to the movie.  The movie of the week was Haywire.  This was not my particular pick - but after a quick view of the trailer - I discovered that Channing Tatum was in it - so I figured why not? - at least there will be some eye candy.... 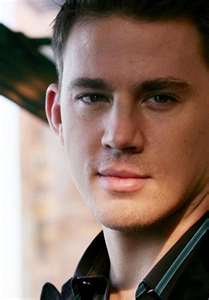 In case you have no idea what Haywire is about:

Beautiful freelance covert operative Mallory Kane is hired out by her handler to various global entities to perform jobs which governments can't authorize and heads of state would rather not know about. After a mission to rescue a hostage in Barcelona, Mallory is quickly dispatched on another mission to Dublin. When the operation goes awry and Mallory finds she has been double crossed, she needs to use all of her skills, tricks and abilities to escape an international manhunt, make it back to the United States, protect her family, and exact revenge on those that have betrayed her.

Movie begins at the ending (presumably) of the story, then begins piecing the past together scene by scene.  It is FULL of crazy fighting scenes.  Yes, Miss Mallory Kane can kick some serious ass!  The fights are totally choreographed - sometimes to the point it looked super fake to me.  The score of the movie played a heavy role - it was almost a character in my opinion.  It was kinda like a jazzy Pink Panther-like song was playing during a lot of the scenes.  I think some of  The Posse liked it, while Chrissy and I found it quite distracting. 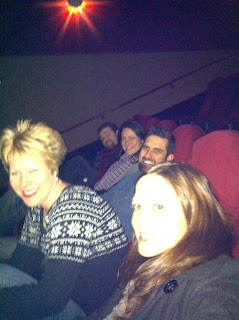 The Posse﻿
On to my rating - I would say Haywire was OK (Good).  It didn't blow me away.  I did cringe a few times (during the fight scenes) and there were some surprise moments that made me jump in my seat.  It wasn't over-the-top gruesome or anything - although it could have been with all the crazy fighting scenes.  I definitely think that for the $7.50 I paid, I was entertained.

Before I wrap this up, I just wanted to note that I am BEYOND excited that The Hunger Games will be released in about 2 more months!! 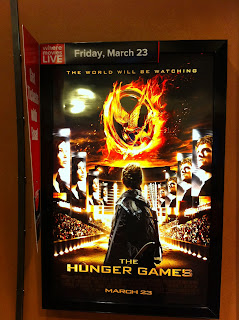 Movie Poster at AMC Livonia.
Something else I discovered - did you all realize that Troy Bolton Zac Efron is all grown up?!?!?!?  Holy Cow!  His High School Musical days are far behind him!   He will be the lead hottie in the upcoming movie The Lucky One. 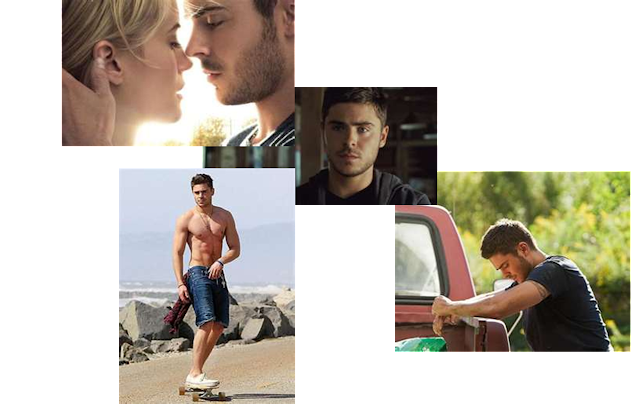 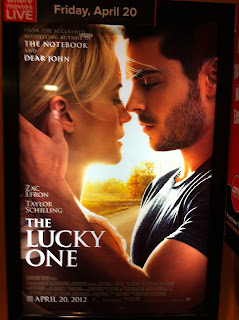 Oh, did I mention it just happens to be another movie taken from a Nicholas Sparks book?  So you know it's gonna be a great love story.  I for one, can not wait!


And let me just say, during the trailer for that movie, most of the ladies felt like they were the "Lucky Ones".  This trailer played before the viewing of Joyful Noise, which I just happened to take my 10-year old daughter to see.  Talk about awkward.  At one point we see him in his underpants and then we see her hand go - well you can see for yourself!  My eyes bugged out and shot to my daughter to see her reaction.  Luckily she was much more interested in her bag of popcorn, frozen Coke and box of Whoppers to even pay attention.  Phew!  Bullet dodged this  time.

Is it me being the overly protective momma that I am, or are movie trailers getting more and more risque?

That food alone would have been worth the trip even if the movie was terrible. Oh my goodness, that looks yummy. I'm so going to have to scope out one of those resteraunts!