A couple of months ago, a friend mentioned that she and some of her family member's were going to register for The Color Run.  If you haven't heard of it (taken from The Color Run):

The Color Run™, also known as the Happiest 5k on the Planet, is a unique paint race that celebrates healthiness, happiness, individuality, and giving back to the community.

Less about your 10-minute-mile and more about having the time of your life, The Color Run is a five-kilometer, un-timed race in which thousands of participants are doused from head to toe in different colors at each kilometer. The fun continues at the finish line with a gigantic “Color Festival,” using more colored powder to create happiness and lasting memories, not to mention millions of vivid color combinations. Trust us, this is the best post-5k party on the planet!

With only two rules, the idea is easy to follow:
Now the single largest event series in the nation, The Color Run is exploding since our debut event in January of 2012 and will grow from over 50 events and 600,000 participants in 2012, to over 100 events and over a million participants in 2013. Click here to join the party.
Be Healthy. Be Happy. Be You.

While The Color Run event is all about fun and positive energy, the 5k also focuses on promoting healthy living. Over 60% of Color Runners are first-time 5k runners and the event is making headway on the growing national focus of improving health and wellness.

In October, The Color Run event was featured on Nickelodeon’s Worldwide Day of Play, an initiative to motivate youth to get out and be active. The segment showed how kids celebrated around the country, featuring Nickelodeon stars and celebrities, including the First Lady. The Color Run event was a major highlight of the segment, and showed kids’ participation and thoughts on the 5k.
One child comments, “I play because it’s healthy and fun; especially when you’re running through color!”

Another remarked, “I’ve never run before, but I’m excited about The Color Run because we get to get color splashed on us and its so much fun.”

“We call The Color Run the ‘Happiest 5K on the Planet’ because our events bring together friends and family in a unique, healthy, and fun environment,” said Travis Snyder, founder of The Color Run.
And after hundreds of thousands of participants have crossed the finish line – the name has stuck.
Want to add some happiness to your life? Click here to register.

“Color Runners” vary in demographics and reasons for running. With no winners or official times, The Color Run caters to anyone – 2 year olds to 80 year olds, first time runners to professional athletes. Over 60% of Color Runners are first-time 5k runners and participate as a celebration and capstone of their healthy living accomplishments. Others participate to honor loved ones who have passed or are fighting diseases. More run for love, and The Color Run event has sparked approximately 10 marriage proposals and one wedding.
What are you running for? Tell us here.

So, whether you are a casual mall walker or an Olympic athlete, the 3 miles of The Color Run course will be the most memorable and colorful run of your life!

The Color Run also focuses on giving back, choosing a local charity for each city we visit. We raised donations for over 60 local and national charities in 2012. Interested in nominating your charity for the event in your community? Click here.

I decided why not?  I figured I'd walk most of the course with my friends and just enjoy being outside.  That was until GTuck challenged me to actually "run" it.  How could I turn down a challenge?  I agreed to give it a shot but had little faith in myself.  Running and I have NEVER been friends.  I actually can say I hated it.  Strongly.

Training began.  We downloaded the "Get Running" App and tackled it day by day.  Little by little, which means 1 minute to 4 minutes to 10 minutes, I tackled the App.  Running is hard.  Running is no fun.  But I did it.  I'd put my ear buds in and just ran.  I sure wasn't fast, but I tried to average a speed of 5.2 - 5.4 mph.  This seemed to be the sweet spot for me, and I realized I could actually run for longer periods of time.  All of my training was indoors on a treadmill, which is TOTALLY different than running outside, in the street, in the elements, but it was still preparing me.

So the day of the race arrived and we were excited and ready to go: 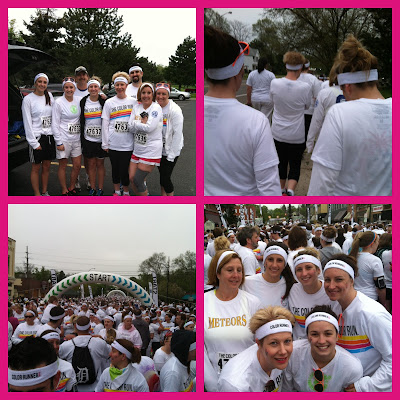 The temperature was a crisp 48 degrees.  I'd say perfect running weather.

Along with 15,000 other runners, we lined up and were released in waves.  We were part of wave 6.  Runners were to stick to the left, while walkers to the right.  We were in the middle.  Once the start was announced we walked pretty fast to break away from the swarms of people.  It was hard to actually start running as everyone was taking off at the same time.

We decided to start with a light jog and before I knew it we were already to the first color stop.  I thought "wow this is easy".  Then after the 2nd color stop, I was beginning to feel winded.  Part of the fun was walking through the color stops, and once they were done, we'd pick our pace back up.  I am happy to report that for all but the color stops and one hilly area, I was a runner!  I was actually passing other runners! Me, Miss I Hate Running So Much, was a runner.

It was hard.  I was totally rooting myself on and didn't want to look like a slacker, so I just kept going.

Once we got close to the finish line, two members of our group were already there and cheered us on, which gave us that extra little boost to finish the race strong.  I was so happy to see that finish line.  I realize this was just a 5K, but to me it was an accomplishment.  A rather large one.

After our entire group finished, we headed to the party area to participate in the color celebration, which was amazing.  Surrounded by hundreds (or maybe thousands) of other runners, celebrating by throwing packets of colored powder in the air.  It was insane.  The colors turned into a grey cloud, and if we didn't have enough color on us, we sure did now. 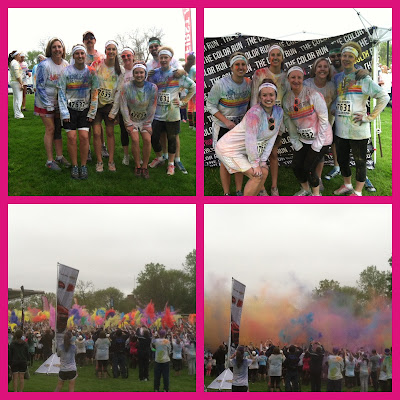 I had color in every crevice.  All I could think about was getting home and showering. LOL 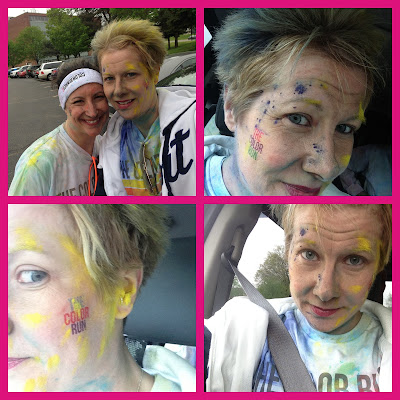 So jealous! We sooo wanted to participate in the one around here but weren't able to because we only found out about it a week prior. Not really enough time :). You did awesome!!!

Good for you!! Heard about it and love the idea...maybe next year!!

The Best of Both Worlds said...

Good job! I want to do one of these!

There is one scheduled locally that I want to do. I smoke so I can't run and I'm afraid I'm just going to look like a fool but it seriously looks like so much fun!

You really did a great job, you're a runner now. I want to see a blog entry on your mountain biking next.

ahh looks like you had so much fun! I did this with my sis and her friends and we had a blast!